Purdue University recently announced that the school research team successfully developed the most in the history of white paint, can reflect up to 98.1% of visible light.

The birth of most white paint, seemingly not much contact with our lives, but it’s a powerful – cool, so all of a sudden become the focus of global media attention, including the United States, “Washington Post,” ABC, UK ” Guardian “and other media have reported that this” history of the white, cold and most of the paint. “

“We always wanted to paint research and development issued by the cooling effect of the weather, the last is the birth of this most white paint.” Dr. Li Xiangyu involved in the study recently accepted an interview with the Morning News reporter. He expected that this most white paint can significantly reduce cooling demand for air conditioning, to help combat global warming.

Environmental Science and Engineering at Fudan University researcher Yu Zhaowu it seems, with the development of urbanization, the urban heat island has become one of the most important urban environmental problems, is also an important factor affecting the health of residents. Thus, the birth of the “most white paint” is undoubtedly worthy of attention. “In order to address urban heat island effect, many cities have begun to include with white paint coating materials, including light-colored roofs and walls as well as the road.” Yu Zhaowu so said in an Morning News reporter Cai Fang.

The birth of most white paint

Since the 1970s, scientists have been trying to develop a high cooling coating reflectivity for visible light, in order to reduce or even replace the use of air conditioning.

Purdue University has such a team. After six years of efforts, Chinese scientists Ruanxiu Lin led the team finally developed a history of white paint, the research results in the form of a cover article published in the “American Chemical Society • Applied Materials and Interface” last month.

According to reports, this history of the white coating that reflects up to 98.1% of visible light, greatly reducing the absorption of ultraviolet rays in sunlight as well as for infrared. In contrast, the market sold reflex reflector cooling coating generally only 80-90% of sunlight.

“Radiation cooling coating more than 40 years of development, but has been unable to achieve all-weather cooling, so we are trying to develop with the cooling effect of the coating around the clock. To achieve this, the key is to increase the reflectivity of visible light, so we proceeded to research and development most white paint. “Li Xiangyu told Morning News reporters Zhuan Fangru and Ci Tandao R & D in mind.

Now the School of Mechanical Engineering at MIT postdoctoral Li Xiangyu, involved in the development of most white paint work PhD at Purdue University, is also the first author of the paper.

According to reports, this history of the white paint was made possible, there are two key points: First, this paint uses a high concentration of barium sulfate as an alternative to commercial coatings are generally used in titanium dioxide.

“The addition of barium sulfate coating has a high reflectivity, it said, can become quite white.” Li Xiangyu said.

It is reported that researchers have tried more than 100 different materials, and then narrow it down to 10 species, for each material tested about 50 different recipes, eventually developed out of this most white paint.

For this most white paint, the most talked about is: how in the end of its cooling effect, such as compared with the air conditioning?

In this regard, Li Xiangyu replied that so closely related to the actual cooling effect and the overall structure of most of this white house paint, insulation, the weather conditions, geographical location, it is difficult to generalize. “However, in our tests as well as under the simplified model, we will white paint on the outside, the results show that the cooling effect of 4-10 degrees Celsius coating can be achieved.”

Not only has a strong cooling effect, there is little air conditioning can not be compared. That is, the traditional air-conditioning heat will remain in the Earth’s surface – just transferred from the building interior to the exterior, while most white paint can release heat into space. With Li Xiangyu’s words, “the equivalent of an air conditioning system that does not consume energy.”

So, if most white paint can be more white, such as 100% reflecting visible light to the point where, in order to obtain a more significant cooling effect?

In this regard, Li Xiangyu explained that although in theory can reach very close to 100% reflectivity, but the practical application can be a problem, “It takes even a few centimeters of a few millimeters thickness of the coating, and it is difficult to withstand long-term outdoor use live, after all, as outdoor paint, long-term reliability is critical. so the next step we will focus on the commercialization process, especially to ensure that the paint may be able to maintain a good cooling effect for a long time in the outdoors. “

According to reports, this is expected in most white paint 1– on sale for 2 years now, the research team has been working with a company on production issues.

So, this cooling effect is the most powerful white paint whether it will be expensive?

In this regard, the researchers said, because most white paint used in titanium dioxide, barium sulfate than the currently used coatings also cheaper, so the price will be sold and the current market price similar to paint.

“With white paint cooling concept is not new, in response to urban heat island effect, many cities have begun to include with white paint coating materials, including light-colored roofs and walls as well as the road.” Fudan University Environmental Science and Engineering Fellow He said in an Morning News reporters Cai Fang and Yu Zhaowu.

Yu Zhaowu explained that the so-called urban heat island effect, traditionally referred to a temperature higher than the same time urban phenomenon surrounding suburbs. “Urban heat island is formed, on the one hand due to natural terrain (such as vegetation, water) urbanization caused gradually replaced by impervious surface, on the other hand increase the thermal anthropogenic emissions due to human activities increased, the heat discharge anthropogenic , including the use of air conditioning. Air conditioning not only increases energy consumption, itself also aggravate the heat island effect. “

“Coping with the heat island effect, there are two ways, one way is to ease the urban heat island effect through rational planning and design of urban green space and water, the other is passive cooling through the use of light-colored paint and other materials.” Yu Zhaowu told the Morning News reporter, in many countries and cities, the use of “white roof” and other passive cooling approach is very common.

For example, in Los Angeles, California, some streets and roads coated with something called “CoolSeal” white paint to give the city cool. According to the Los Angeles Bureau of Street Services, painted “CoolSeal” road an average of 5.5 ℃ lower than that of other road – 8.3 ℃.

Some US cities have introduced rules requiring a certain percentage of some commercial building is reflective roof, thereby reducing the use of air conditioning, saving energy consumption.

For example, in 2014, Los Angeles would require roofs of all new buildings have adopted a “cold roof”; another example, ahead of New York in 2009, requires new low-slope roof using a reflective coating, to 2019 and increased its reflection of requirements. In 2009, New York had also launched a decade-long “white roofs” project, for a total area of ​​10 million feet of roof painted with white paint.

The actual effect of concern

In Yu Zhaowu view, to deal with the urban heat island effect cool white paint is a good idea, therefore, the birth of this most white paint is undoubtedly good news, “However, the practical application down if also so effective, deserves further attention.”

Yu Zhaowu pointed out that the experimental results and the actual results obtained in a large area of ​​investment after use may not be the same, “A lot of good laboratory material can be made out, but to the specific production, a large area after each application, but there will be all kinds of kind of problem. “ 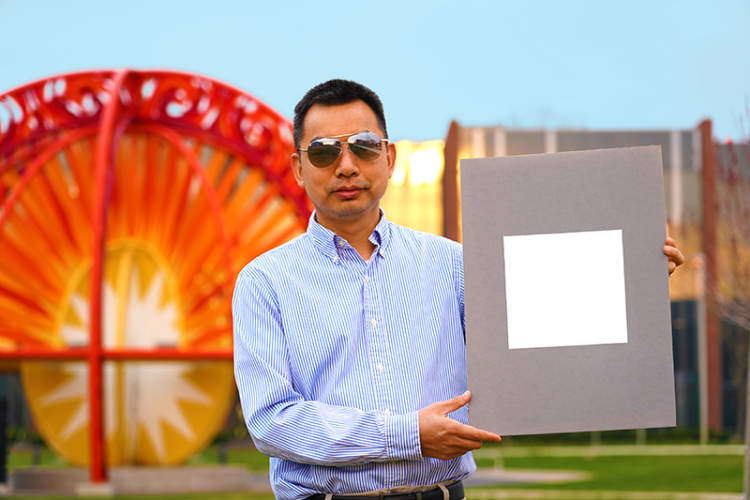 Yu Zhaowu said, which is a point of concern, the researchers said price is not high, but the maintenance costs can be a problem, “The reason why most white paint has good cooling effect, it is highly reflective of visible light, but white is not dirt, dust, rain and so may affect its reflective and cooling performance. “

In addition, large-scale use of this cool paint and materials, whether the environment can have unintended side effects is also of concern.

However, given the limited urban space, to expand green space is limited, so the second method – is also important to cool the city by light-colored material, “This is what I think the reason for this most white paint research and development concern . “